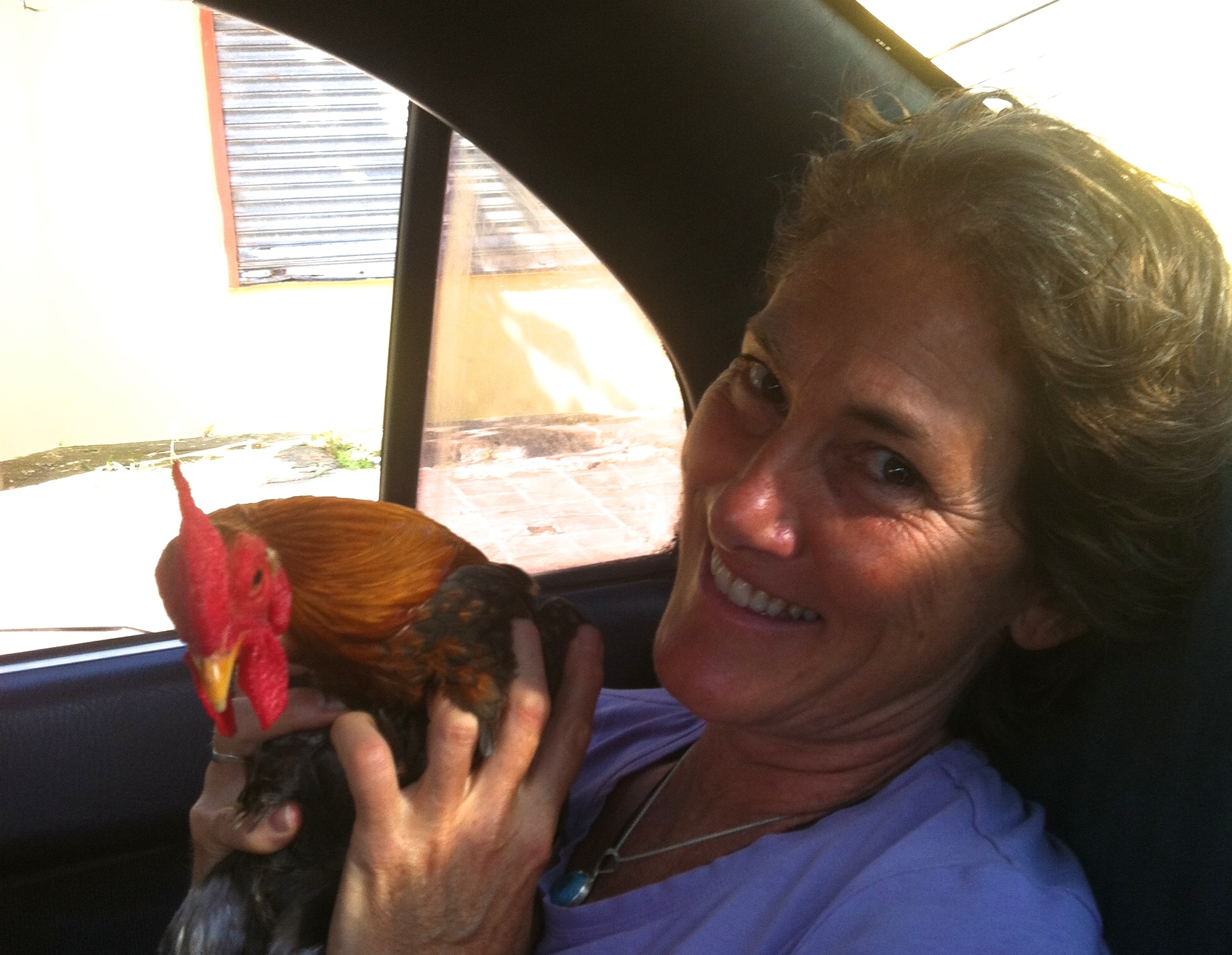 I was invited by one of the Dominican horse grooms, who works for the German woman I work for, to go riding with him on some of his own horses.  He has 10….or more.  I took the public taxi to La Bomba, our meeting spot, the local nightclub in his town, near my last village. I got talking to a guy next to me in the back of the taxi seat and suddenly realized he was holding a beautiful rooster in his lap! He let me hold it and it fell asleep, to it’s owner’s surprise. You have heard about “chicken busses” in South America and Mexico?  Well, this was my very own “chicken taxi”!

The taxi driver let me off at the gas station and I said, “Donde La Bomba?”Everyone in the taxi pointed but I still didn’t see a sign.  I saw a bunch of plastic chairs outdoors near a chain link fence and wandered over there….then realized this was the “nightclub”….at the gas station! I figured so because of the small outdoor bar and mirrored disco ball overhead!  It was open-air style and over looked the gas station.  Must be a hopping spot in the evening!

I sat and waited for my friend and then right on time, there came Ali on his motoconcho.  I jumped on and we took off just down the road and turned onto his dirt road through the “barrio”.  (I only take short motoconcho rides…none long distance on main streets…too dangerous, in case you were wondering Mom and Dad!).

These people live so simply.  Cinderblock homes crammed in tight together, kids playing happily in the street, women watching from the windows, smiling and waving, “Hola!”  Big smiles.  “Hmm…who’s the Gringa with Ali?” they were most likely wondering. 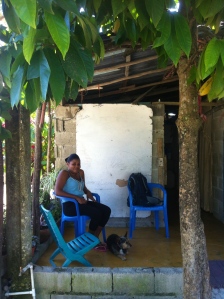 I met one of his daughters, Louisa.  23.  I asked if she works.  “No”.  She lives with her dad and brother there.  I wondered what she does all day?  Then I found out what keeps her occupied, as of late anyway!  She brought me across the street, behind the pretty turquoise house, to a small pen where there was a 5 day old foal!  SO SWEET!  She was orphaned…somehow the mom died, in childbirth? Louisa was feeding her milk from a bottle and gave me a turn.  She was so hungry and started sucking on my finger. No teeth yet!  So precious.  I wonder how she will fare on cartoned cows milk.

Ali had gone off somewhere for quite awhile after motioning, “un momento”.  There were two horses saddled and ready to ride, at the side yard, which was a small lot full of garbage.  I asked to use the “banos”….wow, there was a toilet!  A bucket of water next to it for flushing.  This was an upgrade from my last visit to a local’s home where I peed in a bucket, no toilet.  Reminded me of my stay in Tonga last year!  This is the part where a traveler begins to appreciate the simple things in life and tries to carry home these memories and be thankful for what we take for granted.  And still, with all this poverty and basic living, the Dominicans are happy people.  I have never once seen an angry person here.

More and more in life, I see how people get bogged down by their “stuff” and how “simple living” is the way I gravitate towards these days. Traveling in 3rd world countries reminds me of this choice I make daily.

I find myself happiest here, when out and about, cruising with the locals on the bus/taxi, riding horses through the streets and mountain roads, holding chickens in the back seat of a taxi and…. I’m especially happy when taking my Spanish class with my amazingly educated Dominican, private instructor, Miguel.  That was to come later in the day.

The horse ride turned out to be an interesting fiasco, in some ways.  We headed out down the road and came to a gringo trying to speak to some local kids on the street corner.  He asked if I knew English.
“Yes, lots”.  He asked where the nearest place was to get a cervesa, (beer).  Then said that 10 of his friends just headed down the road on horses and wondered if they would be coming back the same way on their return so he could take pictures of them.  “Yup, probably”.

Ali and I crossed the main road and soon caught up to the 10 other riders.  One girl was off her horse, (it was a mule actually) crying in the street, the Canadian dad yelling at her to get back on.  She was afraid.  Ali got off his horse to assist and then we all headed down the busy road together, a road full of motoconchos and trucks and kids. 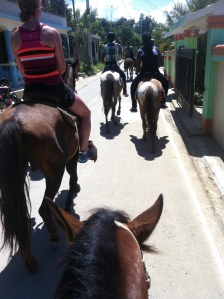 We went a ways and I realized we were going right through “my” village, when I worked at the other ranch.  We got to the major (minor, really) intersection and I saw the typical bunch of people and motoconchos there, on the corner.  Suddenly one guy yelled out, Yanet! (the J is a Y here).  “LEO!!! “  He came over and hugged me while on my horse, spooking him sideways.  “Adonde vas?”  “Where are you going?”  Leo was my sweet motoconcho driver while at the ranch.  The only one who was polite, with no added flirting as part of my ride.  We waved goodbye with big smiles and we were off again, up the hill.
There were a couple of Dominicans riding with us, one wearing a cowboy hat and boots.  I figured he was the guide.  But then realized he didn’t seem to be doing much guiding and didn’t seem to know how to handle his horse very well.  I asked one of the gringas, from Canada, who was the leader?  She said she wasn’t sure…..”one of the security guards at our hotel (guy in the cowboy get up) said his friend has 10 horses and we could go riding”.  OHHHHH!  I finally understood. Ali was the friend and THESE were HIS horses, which explains his long absence back at the hacienda.  He was helping them all get ready for their ride, over at his farm.

Ali kept wanting to just ride off ahead with me, leaving the others and have our “tranquil” ride, as planned,  but all the horses were wanting to stick together and since no one knew how to steer or ride a horse for that matter, (several fell off along the way!)  Ali felt obligated to stick around and help out. They WERE his horses after all and he felt responsible once he saw this chaotic scene.  So the whole gang of us continued up and down this dirt road until we came to the river.

The plan was to ride through the river all the way back, knee deep in water…something I was looking forward to on this hot day, but when we got there we discovered that the river was quite low and there was some “problema” with this so we could not go this route, as planned and headed back from where we had come.

We tied our horses and took a break under the palm frond palapas overlooking the river and got water and cold cervesas.  Ali and I shared one and he talked to me about my family, my daughter, his family, etc….all in Spanish, as he doesn’t speak English at all.  I showed him photos of my world back home, on my iPhone.  He invited me to come stay with his family next time I come and was sad to hear I was moving on from here next week. I consider the idea for someday.  I’m suddenly lamenting the loss of new friendships after my two month stay.  Living in the barrio with a local family would be quite the experience!  It would surely improve my Spanish quickly!

After our ride was nearly over and we returned to the main road, I left my horse with Ali to pony home behind his horse, as I was going to run late for my Spanish class.  I said my goodbyes and flagged down a public taxi, getting in the back seat, crammed in with three others. Up close and personal. “Mucho gusto!” (Nice to meet you!) I said with a smile to the woman next to me and we laughed.  We stopped for one more and that made 4 in the front and 4 in the back of this small 4 door sedan….Dominican style taxi….Sardines once again.  We were off to the town of Sosua, a 20 minute ride, people coming and going from the taxi along the way.  I recently discovered that Sosua has the highest rate of prostitution in this country…that’s a whole nother story!….Sad…you see young girls, no more than 15 or 16 with older (60’s) gringos, holding hands strolling down the beach. “Rent-a-girl”…for a month!  Yikes.

My teacher was waiting and was surprised to hear I only had one lesson left before leaving next Friday, as he had forgotten my departure date was coming so soon.  AND…..Since I am heading to SICILY next (!!!) and he is fluent in Italian, we decided to do an Italian class instead of Spanish!  We both had a blast. I was remembering some things from my last few classes 4 years ago.  He was surprised at what I already knew and complimented me on my accent and said some other nice things about my learning abilities, with which I was pleased, as I always thought I was horrible at learning languages. But, I’m finding it is quite the contrary and it comes easily to me.  I guess I just had horrible language teachers in high school…or I just learn better one on one?  Whatever the case, it is a thrill to finally be learning new languages.

We made an arrangement to do Italian lessons via Skype, when in Italy!  He has always wanted to go there and accidentally said, “oh, and you can be my tour guide and show me things on your computer on Skype, like the Tower of Eiffel!”  “Oh, but that is in Paris!”  I said…”I will show you the Vatican!” Funny.  We both cracked up.  And he was slightly embarrassed.

Anyway..he doesn’t want payment for the lessons.  He only wants to do it as an exchange for the experience of me bringing him as close to Italy as he has ever been.  It will be exciting for him when I get an Italian speaker on Skype with him!  He is as thrilled about this idea as I am!  He told me the next language he wants to learn is Russian, but no one teaches it here.  I mentioned that my plane stops over in Moscow and we plan to Skype together from the airport!  He was thrilled beyond belief.  At 26, Miguel already knows, and teaches, English, French, German, Italian and is learning some Japanese! Impressive!

I always leave that class feeling so high on life, energized and inspired.  I walked the streets afterwards, checking out the local clothing shops and fruit markets.  Not needing anything, just looking and feeling part of it all, the noise, the cars, the loud speaking people….taking it all in and feeling lucky to be so immersed in the bustle of it all and content with myself to feel so at home here.